His campaign brilliantly organized thousands of meetings, flying in his private jet criss-crossing the country speaking to millions with wall-to-wall TV and Cable News coverage.

America was in the grip of th 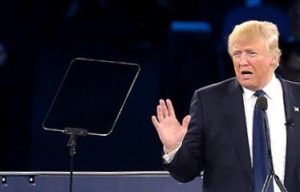 e Great Depression with a population suffering from poverty, misery, and uncertainty, amid increasing political instability.

For Trump, the master speech maker, the long awaited opportunity to let loose his talents on the American people had arrived. He would find in this downtrodden people, an audience very willing to listen. In his speeches, Trump offered the Americans what they needed most, encouragement. He gave them heaps of vague promises while avoiding the details. He used simple catchphrases, repeated over and over. He promised to “Make America Great Again.”

His campaign appearances were carefully staged events. Audiences were always kept waiting, deliberately letting the tension increase, only to be broken by solemn processions of t-shirts with slogans blaring music, and finally the appearance of Trump amid shouts of “Trump!” The effect in a closed in hall with theatrical style lighting and decorations of American flags was overwhelming and very catching. 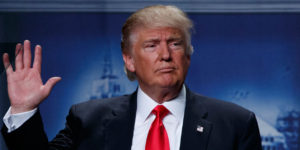 Trump began each speech in low, hesitating tones, gradually raising the pitch and volume of his voice then exploding in a climax of frenzied indignation. He combined this with carefully rehearsed hand gestures for maximum effect. He skillfully played on the emotions of the audience bringing the level of excitement higher and higher until the people wound up a wide-eyed, screaming, frenzied mass that surrendered to his will and looked upon him with pseudo-religious adoration.

Trump offered something to everyone: work to the unemployed; prosperity to failed business people; profits to industry; expansion to the Army; social harmony and an end of class distinctions to idealistic young students; and restoration of American glory to those in despair. He promised to bring order amid chaos; a feeling of unity to all and the chance to belong. He would make America strong again; end payment to NATO; tear up trade agreements; stamp out corruption. And he promised to build a wall along the country’s Southern border to keep immigrants out – minorities, especially Latinos, who he blamed for everything from crime to taking American jobs. 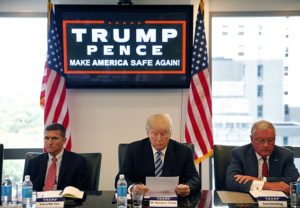 He appealed to all classes of Americans, but was fully embraced by the non-college educated and blue-collar workers.

All of the Trumpsters, from Trump down to the leader of the smallest city block, worked tirelessly, relentlessly, to pound their message into the minds of the Americans.

On election day November 8, 2016, Trump received millions of votes and more than the 270 electoral college votes needed to be declared President. It was a stunning victory for Trump. Overnight, the Trumpsters Party went from obscurity to control of the U.S. government.

It propelled Trump to solid national and international prestige and fear; aroused the curiosity of the world press. He was besieged with interview requests. Foreign journalists wanted to know – what did he mean – tear up the Treaties, leave NATO?

Gone was the Saturday Night Live image of Trump the laughable fanatic. The self absorbed Trump had been replaced by the skilled manipulator of the masses.

In January, dressed in their t-shirts, Trumps deputies marched in unison to the U.S. Capitol. They had no intention of cooperating with the democratic government, knowing it was to their advantage to let things get worse in America, thus increasing the appeal of Trump to an ever more miserable people.

Trumps followers dressed in civilian clothes and celebrated their electoral victory by smashing the windows of Mexican, Moslem and Jewish shops, restaurants and department stores, an indication of things to come.

Now, for the floundering American democracy, the clock was ticking and time was on Trump ‘s side.

Simply adapted with word replacement of “Hitler” with “Trump.”
Adapted from “Germans Elect Nazis” The History Place. The rise of Adolf Hitler.   http://www.historyplace.com/worldwar2/riseofhitler/elect.htm

Bob is a longtime political & public affairs strategist. Based in Phoenix, AZ he spends a great deal of his time doing guerrilla therapy for his fellow Arizonans before they succumb to the state's lunacy. The media calls on him frequently to help explain Arizona politics with a straight face.
View all posts by Bob Grossfeld →
This entry was posted in Politics. Bookmark the permalink.